The first batch of the participants from Aug 8 to 12. 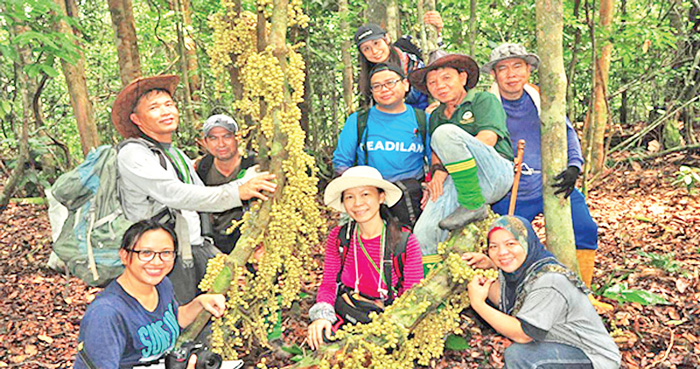 Gnetum klosii (Gnetaceae) is one of the interesting plants sighted due to its abundant grape-like fruits on the stem and branches (Photo: SFD). 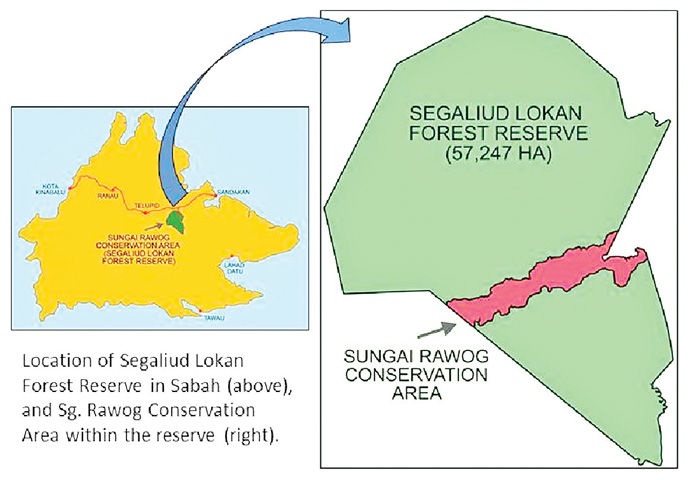 SANDAKAN: Much is not known about Sungai Rawog Conservation Area in central of Sabah. It is one of the largest wildlife corridor in active production forest reserve in the state.

With an area encompassing 3,118 ha and 23.4 km in length, it serves as an active wildlife corridor connecting Deramakot Forest Reserve and adjacent oil palm plantations especially for the key umbrella species in Sabah.

Situated within the Segaliud Lokan Forest Reserve (SLFR), it is part of the total of the 6,447 ha of conservation area or 11% of its total 57,247 ha forest area. The reserve is also known as Forest Management Unit No. 19(B), and has been managed by KTS Plantation Sdn. Bhd. since 1993 under the License Agreement with an effective period of 96 years.

For the record, KTS Plantation Sdn. Bhd. is the first private company in Malaysia from the forest industry certified with both MS ISO 14001 for Environmental Management System certification and MC&I (Natural Forest) for Forest Management certification which is obtained in 2005 and 2009 respectively.

Despite serving an integral function for conservation initiatives in SLFR, less is known about the biodiversity of Sg Rawog since 1993. Hence, KTS Plantation took the initiative to jointly organize a scientific expedition with Sabah Forestry Department (SFD) to explore Sg Rawog’s flora and fauna from August 8 to 18. Some 160 participants (in two batches) were involved, with participation from Universiti Malaysia Sabah (UMS), Sabah Wildlife Department (SWD), Sabah Parks (SP) and WWF-Malaysia. On the first night at the camp, KTS Plantation Sabah Area Manager (Forestry), Collin Goh, welcomed the participants to the scientific expedition.

A total of 11 permanent sampling plots were established to monitor the status of the area. Esther Dyi did the soil assessment during the expedition. The preliminary results showed two types of soil colour ranges from very dark brown to white (indicates heath forest) and reddish brown to yellowish red (lowland mixed dipterocarp forest). The soil texture ranged from sand to sandy clay loam.

Plant diversity survey and botanical collection were carried out by John Sugau and his team of the Sandakan Herbarium. Suzana Sabran worked on ornamental plants while Andi Maryani on ferns, Richard Majapun on dipterocarps, Alviana Damit on pitcher plants and Doris Seligin on medicinal plants. Some 40 dipterocarp species were recorded, with two endemic to Sabah, i.e. Shorea symingtonii and S. waltonii. Two pitcher plant species were sighted, namely Nepenthes ampullaria and N. mirabilis, with a hybrid,

Nepenthes ampullariaN. x kuchingensis (between N. ampullaria and N. mirabilis).
The researchers from Institute of Tropical Biology and Conservation (ITBC), UMS were led by Assoc. Prof. Monica Suleiman who studied mosses in the conservation area. Dr Kartini Saibeh from Faculty of Sustainable Agriculture (FSA), UMS, conducted research on Araceae which is the family of taro. One undescribed species of Araceae from the genus Homalomena was recorded. Plant researchers from SP were headed by Rimi Repin, and they worked on Begonias and nickel hyper-accumulator plants. Rimi recorded three Begonia species,

Two Sabah endemic dipterocarps, Shorea symingtonii (left) and S. waltonii, were recorded from Sg. Rawog Conservation Area (Photos: SFD).with two of them undetermined. Dr Miyabi Nakabayashi of Ryukyus University, Japan in collaboration with SFD, was researching on figs, which are a source of food for frugivorous animals.

Sabah Wildlife Department was represented by Hussien Muin, with his team surveying mammals, reptiles and birds. Sg Rawog Conservation Area is known to have high abundance of orang utans and Bornean pygmy elephants, and the river itself is inhabited by crocodiles. Dr Henry Bernard, Dr Jephte Sompud and their team from UMS as well as Elyrice Alim of WWF-Malaysia and Mohd Aminur Faiz (SFD) were also researching on wildlife.

Among other mammals sighted were gibbons, grey-leaf monkey, bearded pig, Sambar deer, sun bear, tembadau, clouded leopard and the Sunda pangolin. Alim Biun (SP) and Hubert Petol (SFD) surveyed the avifauna. All the eight species of hornbills found in Borneo were sighted during the expedition. The presence of the great Argus pheasant was also recorded. Paul Imbun (SP) and Pg Sahlan (SFD) conducted survey on frogs and toads. At least 18 species were recorded, with seven of them endemic to Borneo.

Dr Arthur Chung, Razy Japir and the Entomology team of SFD surveyed the insect fauna which included butterflies, moths, beetles and dragonflies. Nocturnal insect diversity as assessed through light-trapping was very high, with more than a hundred species enumerated on a meter square of the light-trapping cloth. For dragonflies and damselflies, more than 30 species were recorded within three days of sampling. At least nine Bornean endemic insect species were recorded and the iconic Malaysia national butterfly, Rajah Brooke’s Birdwing was sighted at the riverine area of Sg Rawog. Dr Homathevi Rahman and Dr Bakhtiar E. Yahya, both from ITBC, UMS, worked on termites and ants respectively.

Besides conservation, nature tourism is another aspect that was given emphasis in this expedition. Jarry Lajanga (SFD), Dr Andy Russel Mojiol and Dr Rosmalina (both from UMS) surveyed the potential sites and products for nature tourism. The natural garden of flask-shaped pitcher plants found in one of the heath forest site was spectacular and breathtaking. The presence of natural salt licks within the area can be used to promote wildlife watching.

Collectively, the researchers have explored the ‘unknowns’ in Sg Rawog Conservation Area. Those highlighted here are just a glimpse of the treasure trove of biodiversity. Research is still in progress in identifying the specimens and analysing the data. All scientific findings will be presented in a seminar to be held three months after this expedition. Hence, stay tuned for more excitement!