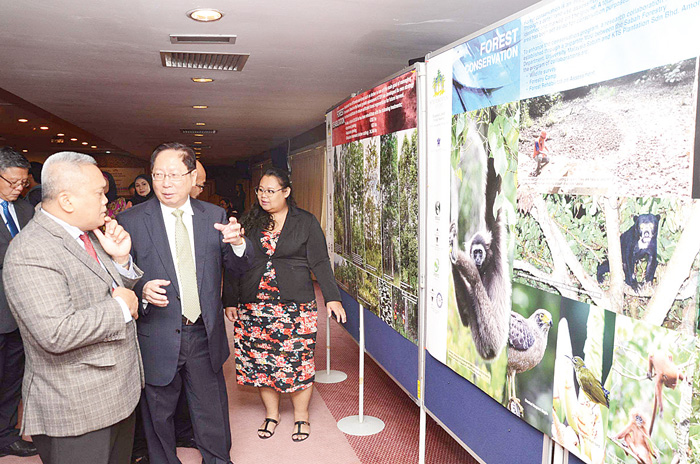 Rasid (left), Lau (second left) and others tour the exhibition at the event.

He said the State Government had granted KTSP a Forest Management Unit (FMU) of approximately 57,247 hectares in Segaliud Lokan Forest Reserve to manage based on SFM principles.

He said the company was the first Sustainable Forest Management License Agreement (SFMLA) holder in Sabah that has successfully obtained the forest management certification under the Malaysian Timber Certification Scheme-The Program for the Endorsement of Forest Certification (MTCS-PEFC).

Sam stated that in his speech, which was delivered by the Deputy Chief Conservator of Forests (Research), Dr Robert Ong, at the signing ceremony of a Memorandum of Agreement (MOA) between Universiti Malaysia Sabah (UMS) and KTSP here yesterday.

He said the two-year agreement was mainly for enhancing research collaboration between UMS and KTS as a follow up from the previous Memorandum of Understanding (MOU) signed in November 2016, and to further reinforce into an agreement more concrete action in strengthening and improving forest management practices, especially in silviculture, wildlife conservation and natural resources management.

“I believe that this initiative by both KTS and UMS is in line with the State Government’s commitment towards achieving successful implementation of SFM including forest conservation through various programmes and projects.”

Earlier, Sam said forest management in Sabah had shifted from focusing on timber harvesting alone to multiple-use forest management, whereby the three pillars of SFM – social, environment and economic elements – were taken on board.

He said the State Government was also focusing on forest conservation to ensure our flora and fauna, including iconic species such as orang utan, pygmy elephants and rafflesia were well-protected for current and future generations.

In this regard, he said the State Government has set a target to achieve at least 30 per cent of Sabah’s land area as Totally Protected Areas (TPAs) by year 2025.

Currently, about 26 per cent or 1.9 million hectares of Sabah’s land mass has been gazetted as TPAs.