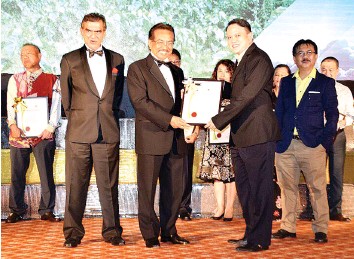 Goh (right) receiving the complaince certificate from Musa (centre) while Sam looks on.
SANDAKAN: KTS Plantation Holdings have received a compliance certificate from the Forestry Department for its achievement and support in sustainable forest management last year.

The dinner also saw 39 personnel working under the department with grade G55 – N29 together with 38 other personnel with grade N22 – H11 receiving the Excellent Service Award.

“To the recipients, I want you to know that you are the chosen ones. I hope you will continue to give excellent service. Be consistent,” Sam said in his speech.

Meanwhile, Sam said that the Sabah Forestry Department has done an excellent job and hence will be given the responsibility to handle import and export of timber in Sabah starting June 1, this year.

Currently, Malaysia Timber Industry Board (MTIB) has been handling the export and import of timber in Sabah.

Sam also said that the conservation effort and forest management of Sabah is recognised internationally including by the Duke of Cambridge Prince William and the South East Asia Rainforest Research Programme.

“For the past 12 months we have been invited to deliver talks in many countries, including London. Can you imagine the Duke of Cambridge Prince William watched videos and talked about Sabah for hours?

“Hence, I do not understand when there are certain parties stating that Sabah (forestry) is in a bad shape,” he said.

Sam added that Sabah has proved its capability in managing its forests after being given the right to control import and export of Sabah’s timber by the Federal government 25 years ago as Sabah forestry is still going strong today.

The attendees consisting of forestry department personnel were entertained by entertainers and guest artists including Aisyah Aziz from Singapore.